It was a dark and stormy night .....
.... But that was only in my mind .......
.... The AK's thrashed the foliage and branches above.
Whilst shitting your pants and pressing down into the ground you try to listen for the controlled Ack Ack Ack, and try to find which direction they come from. The continuous stream of lead, whilst deadly, was most probably coming from some locals with little experience and will be high and going higher to the right. As the screams behind you attest the Pro bastard with the 3 controlled shots have hit more than once.
Then you find that you are lying over your grenade pouch. You curse yourself and the intelligence all clear that sent you on this route this morning, but you still mange to send a grenade to silence the Pro.
That was your longer experience against his shorter. This inspires a shittload of lead from behind you.
No sela
You pick up your dead and anybody wounded. Their dead stays, but you count them.
After your debriefing you settle down with a bottle of rum, no coke, no soda, rum from the bottle.
And you remember the man saying "I will write you up for a gong, but do not insist that you want to salute the dead as they are driven off", Fuck.Him.Fuck.the.Gong.
But by now the " stormy night" have changed into a tropical rainstorm that cleanses the blood and you can start again in the morning.
People are lousy humans
# posted by KeesKennis @ 1/31/2011 07:46:00 PM 2 comments

Keep your head down, Keesie. Stay away from the cheap rum, it will turn your liver into a chalky white pile of hyena shit.

Some of us understand that there are things lurking in dark corners of one's memories.

Some of us have similar.

go hug your wife and smile at your children.

This stuff is behind us for the time being...

OK - That is enough now - Please NO more!

.... The Missus banned me from sporting a kilt after our wedding reception.... a bunch of drunken Marines and one wearing a kilt tends to lead to taunts......

.. needless to say, the bridesmaids saw the wedding tackle that night long before The Missus did....

When I was over at Mom's house today, my Uncle Virgil and Aunt Peggy came to visit. I was worn out from playing football with the boys, so I went to sit on the screen porch and talk with my family while the boys choke-slammed and killed each other. Virgil enjoyed the show. "They don't get tired, do they?" he observed.

No, they don't. But when the back yard became quiet a few minutes later, my ears pricked. I looked back there and couldn't see Quinton or Jack. "Where did those heathens go?" I asked.

"They went behind that oak tree over yonder," my grandmother answered.

I knew what they were doing. They were pissing in the bushes. I stuck my head out the door. ""Are you guys peeing in the bushes?" I yelled. "Yes, sir," was the reply, in perfect two-part harmony. "Okay," I said, and went back to sit on the porch.

When Quinton came back on the porch for some chicken, Virgil asked him, "Boy, what were you doing back there behind that tree?"

"I was marking my territory," Quinton replied, with a big grin.

"Marking your territory? What happens if some other little boy goes back there and pees in those bushes today? There goes your territory."

"No, sir! I've been peeing in those bushes for six years now. That's MY territory."

I thought Virgil was going to choke with laughter.

If you have half a glass of rum to spare, please pour it into his PayPal account 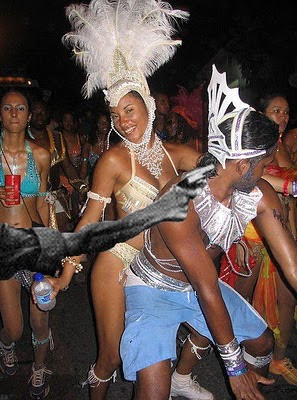 To help him over the Hump, a few beers would do.
Half Speed.
Half Rubber.
God Speed.
And Redemption.
I will wonder for a long time why Sarah Palin had to shoot that young man.
Yeah, tough talk can kill.
# posted by KeesKennis @ 1/14/2011 01:09:00 AM 7 comments

Comments:
You mean, give V-man some money?

Wouldn't that be a despicably socialist thing to do?

"Wouldn't that be a despicably socialist thing to do?"

No. Stesaling it from someone who works and giving it to someone who has no earthy value is the standard socialist modus operandi. Giving money to someone because you want to is the way decent people do things.

I just happen to think that no-one should have to beg, and thus think that a 'social' safety-net is a good thing. Yes, there will be people who mis-use it, we need to fine-tune the rules to exclude them. Begging for money just to go get drunk and party is not acceptable. Such people need to stand on their own two legs (not others groins).

A "social" safety net is theft. Theft is wrong. But if you're ok with it, send me your motorcycle. I don't want to have to beg for one.

The safety net should cover only the minima, food , drink, a roof over the head. I agree that everything else should be earned. Unfortunately some skivers 'earn' via petty crime.

And we already 'socialise' the cost of crime, inasmuch as honest you and I pay for a police force, jails, a justice system etc. Life would be cheaper without them, but I don't propose unfunding them, neither I think do you. Fines etc are sadly no way large enough so that criminals are paying for it.

We need a way to support those genuinely looking for the increasingly rare jobs (e.g. Blogger Demeur) but preventing the skivers exploiting the rest of us. I think we agree here.

So I won't send you any of my M/Cs as that would be above subsistence level, but you're perfectly welcome to come riding with me if ever over here. Acceptable compromise?

"We need a way to support those genuinely looking for the increasingly rare jobs (e.g. Blogger Demeur) but preventing the skivers exploiting the rest of us. I think we agree here."

No. Not even a little.

There have long been individuals willing to aid the truly destitute. Every catholic church in the US has a St Vincent De paul society, whose purpose is to catch those who fall through the cracks, feed them, help them pay their bills, and get them work so they can get back on their feet. In my church alone, hundreds of thousands of dollars are donated willingly, often by the same people that took advantage of the program in previous years. The charity, by the way, is not limited to Catholics, we got a muslim family back on it's feet early last year.

Social programs are good for one thing and one thing only: Creating a permanent class of useless lazy fucks.

I certainly wouldn't want The One True Church(tm) or any other responsible for any social net. Too open to arbitrariness, IMHO.

They can't even run a boys' school over here without molesting the customers :-(

Typical image of the guy near the middle of the scrum 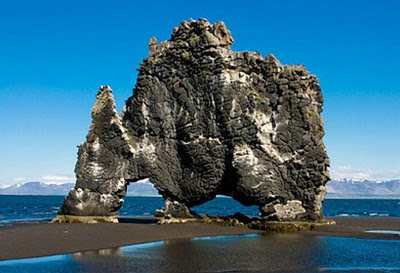 The image have been reduced to fit my screen.

I think we should use liberals for scientific testing

Testing on/with mice does not work 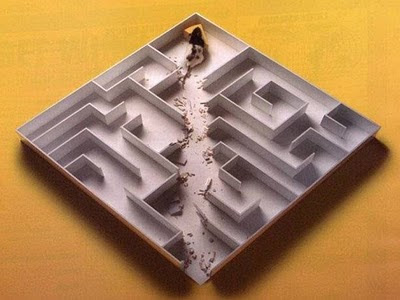 Liberals on the other hand have no long term survival strategy and will lead to more accurate results.
They have no moral parts, by God they are just like animals.
I am sure if we plan this correctly they will line up to be tested, thinking of all the seals and baboons and cuddly rabbits that they can save.
By The Way, did you notice that the bottom portion of the pic above is very sexy

My fucked up mind.
Makes me hungry.

Yes Stu I can 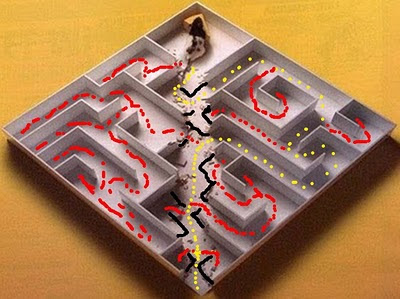 BLACK LINES: Maze as was
YELLOW DOTS : Way thru maze
RED DOTS : The Liberal way on my dime

Mentally try to reconstruct where the walls must have been for it to be a valid maze. No way.

No, your yellow line is wrong IMHO.

Example: look at the square at the top. Its lower corner is nibbled away, implying that there must have been a wall there. Ditto for all other nibbled places. Therefore there was no way through the maze, methinks.

Liberals are no good to test in a maze. All they would do is sit down and piss and moan for a handout and demand someone to lead them out of the maze, rather than think for themselves.

I think it brings a bit of masculinity into soccer 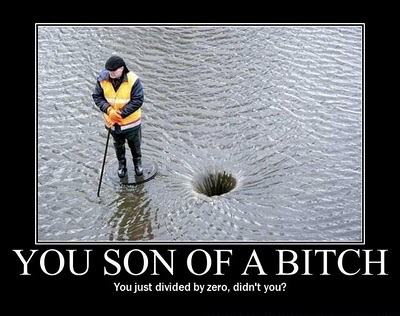 Comments:
That would be a drain on my resources ;-)

So I can offer you this instead:-

A deer finally gets Rex

What comes around, goes around

Please visit Rex and show some compassion.
"I sincerely hopes it doesn't hurt when you pee"
Thanks, to his brother Paul, a Lawyer, who sent me the news and the video, as far as I can unnerstand the LawSpeak the udder Lawyer Brudder took the video.
"Hey Rex, while you are in hospital do not give any of your evil brothers power of attorney"
# posted by KeesKennis @ 1/09/2011 02:34:00 PM 2 comments

Comments:
thanks, I feel better now but that damn lawyer is going to pay and pay

Kees this is Hilarious! Rex has recovered except for the "Brain Injury" and some "Bizarre Personality Changes".....Denise (of Rex and Denise) 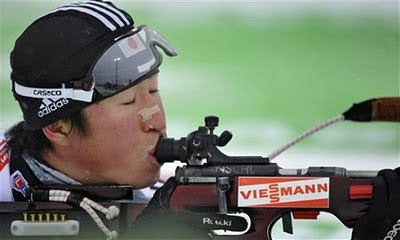 As given from the Blob 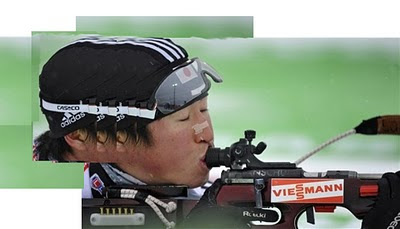 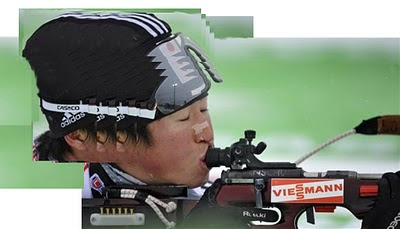 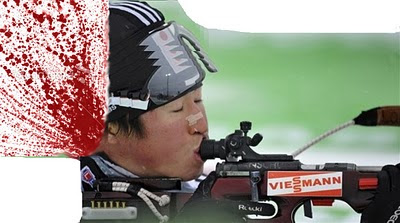 My final rendering
It is the IDEA that counts, isn't it?
But then real artists like Serr8d have posted this 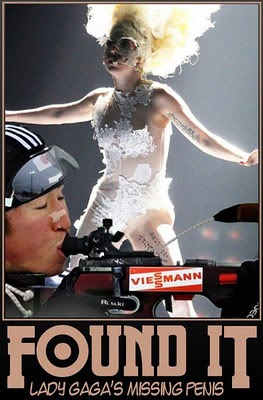 And I had to google and translate a lot to find that the writing on her leg means, "You have to be taller than a Japanese, to enjoy this ride, but Cowboy BloB will pass"
Boy, that serrated, rope is vely , vely crevel.
# posted by KeesKennis @ 1/03/2011 09:14:00 PM 2 comments

Comments:
Heh. Glad you liked it.

Is that why it's called cocking a rifle?