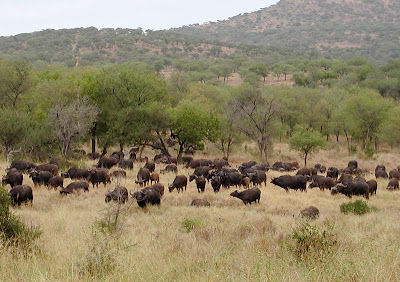 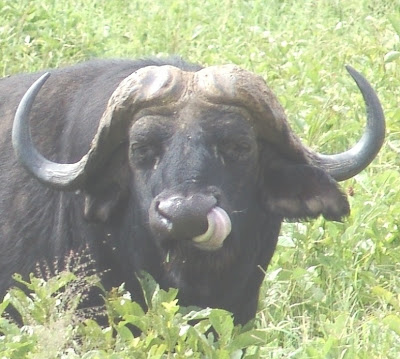 The buffalo is a dangeroos animal:

So there I was in Southern Angola with a fucking difficult American as a client.

We spent day before the hunt with sighting in the rifles and with generally perking up the client.

This specific American, and the leader of his party was fairly accurate, with lapses noted by my co-workers.

I as allways was so worked up for the next days hunt that I noted effall.

Fast forward by a day:

We have left the van and are walking slowly towards our target, that was a herd of buffalo that we hope to encounter about 3 kilometers away.

"How far are we going to walk?" she asks wailingly.

"John, Jackson you stay here with the MADAM, you can keep your rifles"

And in response to some hand gestures by the american to his throat:

"No Mr. Carter, we will not stop and have a recovering session"

Safely hidden amongst the bushes Carter and myself have it out.

About five minutes into it: "If you want to fuck off, please do, I will not refund your 'extraordinary fee' just because have a pussy wife and daughter, now do you want to go and shoot some buff"

"You calling me a PUSSY"

Fast forward by three hours, that is two hours before we expect the buff to cross our lines:

In a southern drawl: "How fuckin long do we have to wait here"

"With or without coke?"

The placing of our position by my team was perfect.

We were surounded by Buff.

"Now Mr. Carter, do you see that BIG male over there by the big stump"

"Yes, yes, the one with the big horns"

"NO, no the old bull standing to his right and pawing the ground"

"Mr. Carter, what do you estimate the range?"

"Christ no, we are closer than 50, and that is where we set your sights yesterday"

Sotto whisper: "Gert, Dinchaka, Everest, the one by the stump"

So Carter takes aim and fires, one, "fuckit", two, "dammit" shots, none of which affect the buff.

We remain concealed as our CLIENT might want to try again.

If he had hit the animal as we expected we would have all stood up, but as he's missed a sitter we stayed down.

Some of the herd closer to us takes off in all directions.

One old one horn bull and a scatter of cows plus a scary of younger ones plus a frighty of one year olds come dirtectly towards us.

Everest, Dinchacka, Gert, Phillo, two guys whose names I can't remember and myself stand up and start shooting, seven guns, lots of lead:

You cannot turn them, they have to die, as easy as that.

They died, some only 12 feet away.

Four or five came straight by, we were only concerned with those on a collision course.

I "sold" 8 carcasses to Mr. Carter, he posed for a photo, with his bitch and all his arms at each of the 8 dead buffs.

I don't know about him but I never wore that particular pair of pants again.

Also I got a bonus for selling so many high priced pieces of game in one month.

UPDATE: The number of dead buffs have been downgraded to 8 as apparently they have grown over the years with every retelling of the story. Family sucks.

In most hunting areas of Africa, the meat goes to the locals who DO appreciate it, and don't give a damn about tenderness, as long as it's meat.

That said, an old buffalo steak would be about as tender as boot soles, and it's probably be pretty rank as well.

As in the US, if you want to eat it, shoot a female or a young'un.

That guy sounds like a real asshole. I enjoy hunting, but I grew up hunting small game, deer, and elk that you spent the next few months eating for dinner. Shooting one of those magnificent old buggers just for a trophy picture doesn't appeal to me. Are they very good eating, by the way? The bison here in America are very good, tasting like a tender, very lean beef.