The cricket's ballad sets the sun,
Bidding farewell, the day is done.
While twilight ushers in the dew,
Welcoming chirps, that bid adeau.

Vastness of dark, and night soon came,
Through wind and thunder, he still sang.
My quickened heart, forever still,
By friend outside, my window sill.

Hark! O'er the valley, and the dell,
His ballad echoes, all is well.
The cricket's ballad sets the sun,
Bids farewell, the day is done.


On the grasshopper and cricket

The poetry of earth is never dead:
When all the birds are faint with the hot sun,
And hide in cooling trees, a voice will run
From hedge to hedge about the new-mown mead;
That is the grasshopper's - he takes the lead
In summer luxury, - he has never done
With his delights; for when tired out with fun
He rests at ease beneath some pleasant weed.
The poetry of earth is ceasing never:
On a lone winter evening, when the frost
Has wrought a silence, from the stove there shrills
The Cricket's song, in warmth increasing ever,
And seems to one, in drowsiness half lost,
The Grasshopper's among some grassy hills.


They were not looking at the cricket I saw.


A happy cricket once did chirp
Upon our bathroom floor.
But now he floats inside our john
And so he chirps no more.
The Chinese say it's lucky
To have a cricket in your home,
But now he is forever gone -
That's why I write this poem.
One night of happy quiet chirps
I thought was really nice,
But four nights of this was just too much
And the cricket's paid his price.
So rest in peace, our chirpy friend,
One flush and then you're gone.
We'll watch you spin and whirl away
At your funeral in our john. 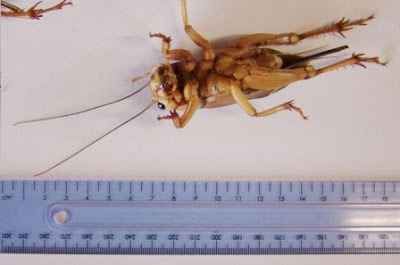 And now for the same photos that were not photoshopped 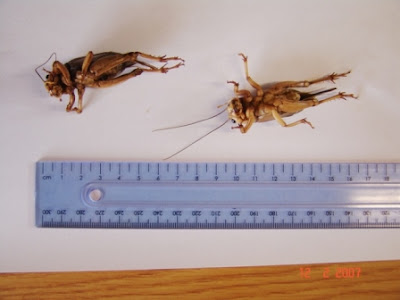 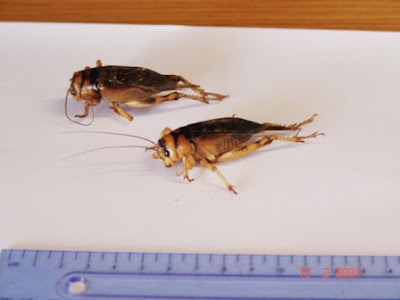 Jesus! Those little buggers are almost as big as our pigeons.

Around hear the Paiutes and Goshutes used to eat a lot of crickets and grasshoppers in their daily diet during the warmer months. For most of them, big game hunting meant bagging a jackrabbit.
# posted by BobG : Monday, February 12, 2007 7:49:00 PM

Comments:
Jesus! Those little buggers are almost as big as our pigeons.

I guess everything is bigger in Africa. You must make those Texans mad!

Around hear the Paiutes and Goshutes used to eat a lot of crickets and grasshoppers in their daily diet during the warmer months. For most of them, big game hunting meant bagging a jackrabbit.

Jesus, Mary and Joseph those things are scary!

DAYUM Kees, show us some pretty animals would ya?

How do you not wander around in constant shoulder-jerking terror?!?!