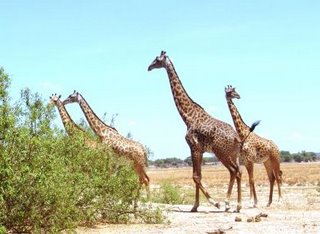 I am sure there are reasons why they evolved like this, I am not so sure that these were properly thought through.

In my many years in the bush I always look on in amusement and always point the camera.

A while ago in another country a Mayor of a biggish town won re-election and he decided to have a Mayoral Feast, with a multiple giraffe-neck rotisserie braai (barbeque) for the constituents. This was welcomed by all.
A week or so later while the orginisation was going on a PETA group came to his town to visit a nearby Nature Reserve.
All hell broke loose. Tree and bunny huggers descended by mail, advertisements and meetings on his head.
Some newspapers and people say today that he did not understand because he was not a first language english speaker.
I have had many talks and meetings with him, I believe (know) he understood very well.

He sent all the complainers COMPLIMENTARY tickets, each with a note saying "Sorry I did not know that your Esteemed Pressence was in town.

They all shup up after being buttered up. Morals?

A great time was had by all

He was re-elected two more times before he retired.